Another day, another waterfall, another beach!

Today I went to the west Auckland town of Piha. Our first stop was the Kitekite Falls, one of the most famous waterfalls in the Waitakere Ranges. Due to current problems with kauri die-back, NZ’s most famous, and mighty tree is experiencing all sorts of ill health, including root rot, bleeding resin, defoliation and ultimately mortality. As a result, all public entry to the bush is being monitored, and everyone has to ensure their shoes are clean as they both enter and leave the bush. To facilitate this, there are purpose built ‘turnstiles’ through which all visitors must go. First you scrape your shoes on a bristly brush. Then, you step on a footplate that dips the bottom of your shoe into disinfectant. It doesn’t take long, and people seem to be happy to comply, which isn’t surprising. Anything that we can do to help minimise, and hopefully eradicate, the die-back should be wholeheartedly supported! 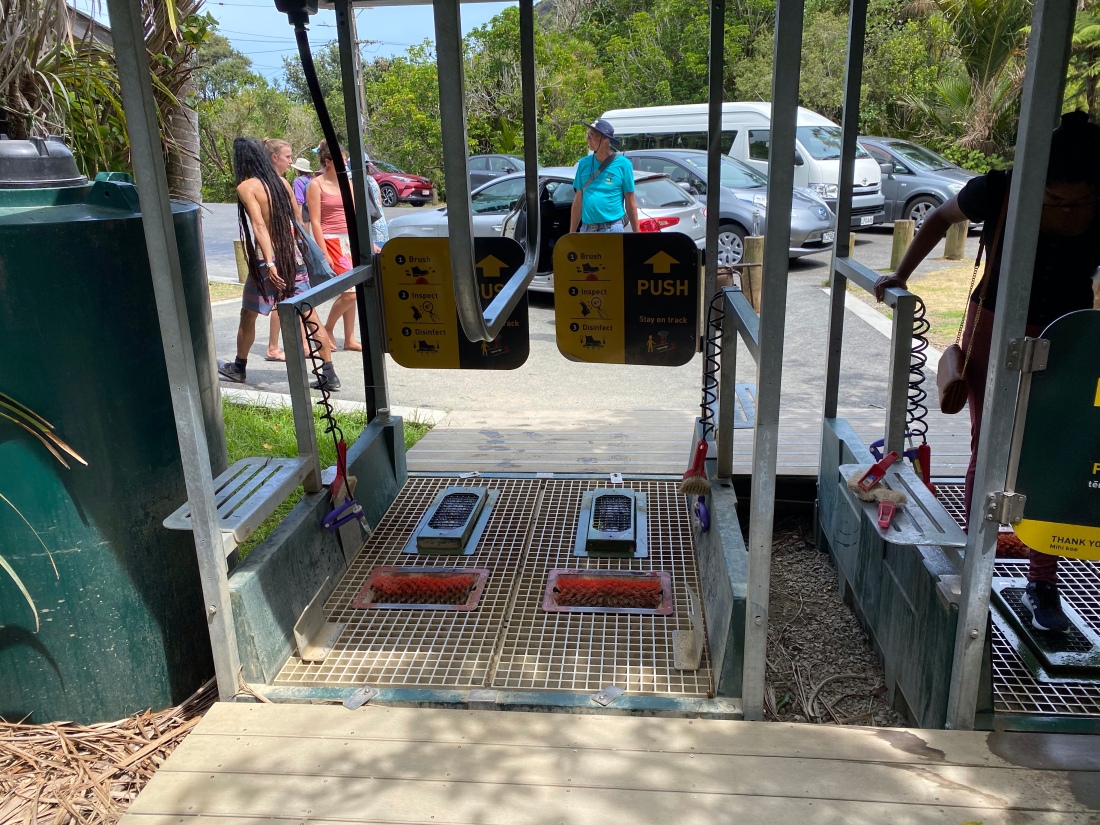 Once we had cleared immigration (!), we started the walk up to the falls. The track had some parts boardwalk, but mostly it was the kind of uneven ground that would be expected in the bush. 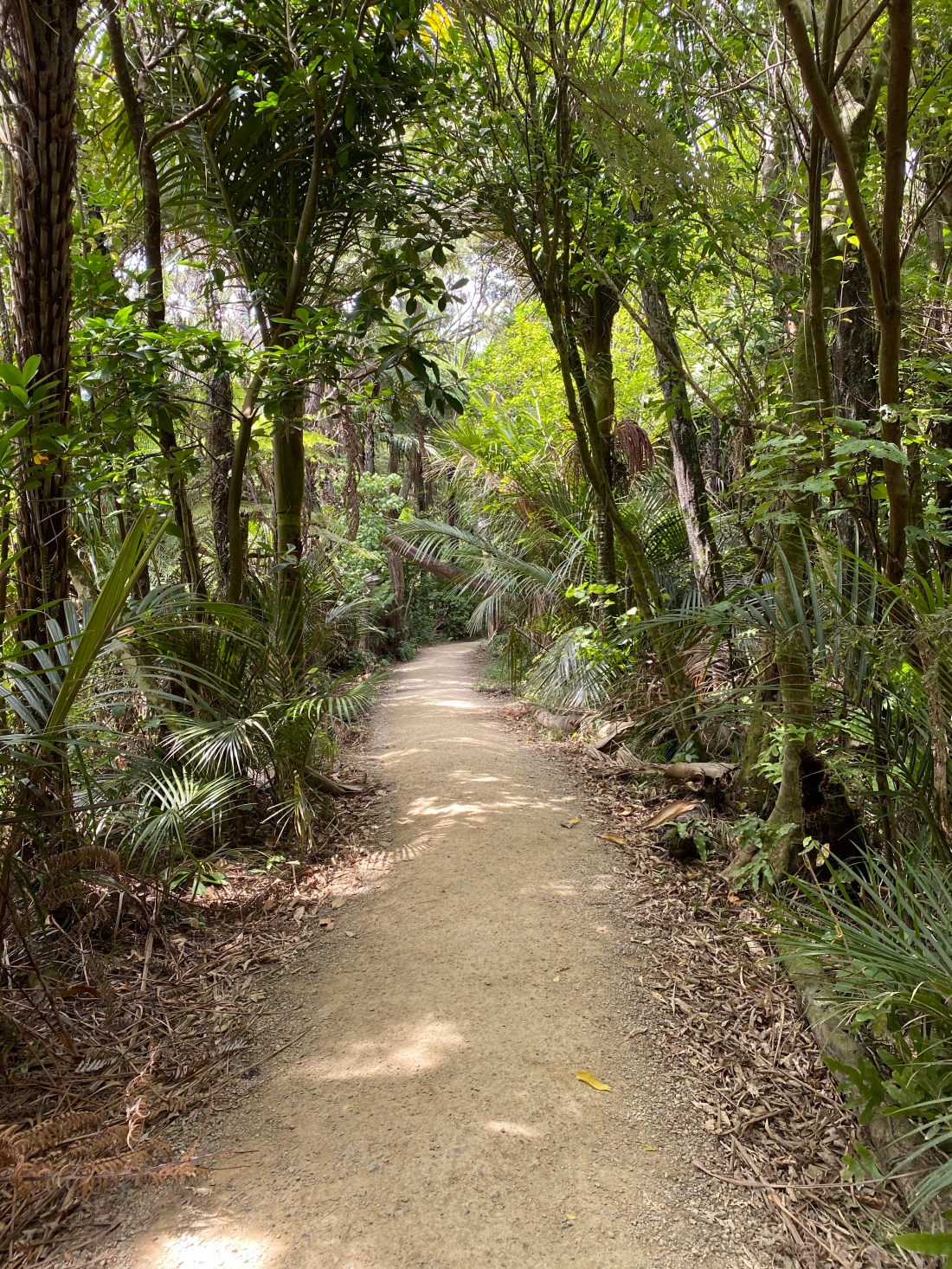 I was glad to see some young kauri was thriving. When I say young, perhaps 100-200 years old. 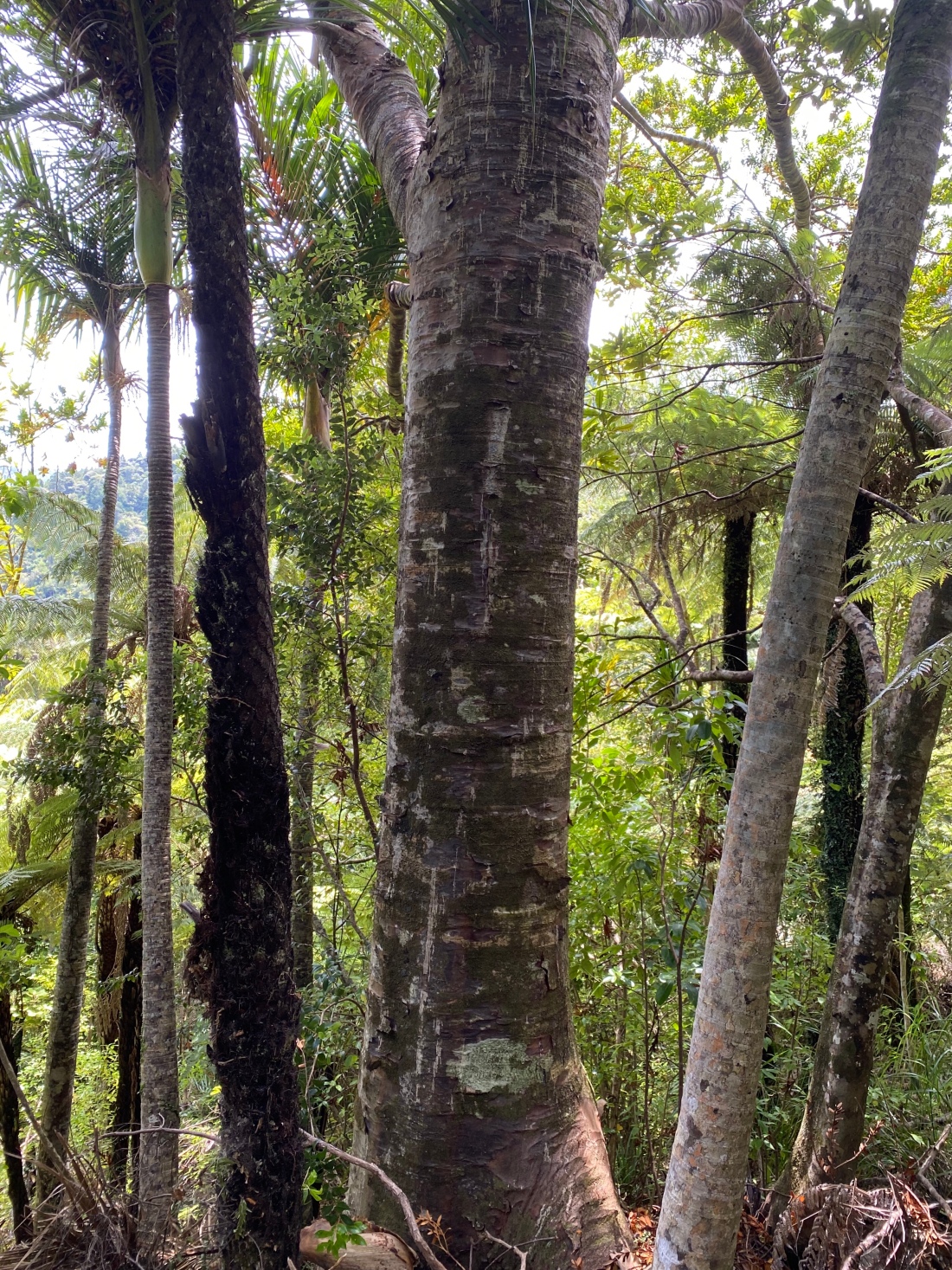 The climb to the falls gradually became steeper. To the left of the track, the ground fell steeply away, which was an incentive to be sure to look where you were going!

We could hear the falls before we could see them, but when we got to the point on the track where we could catch the first glimpse, it was spectacular! 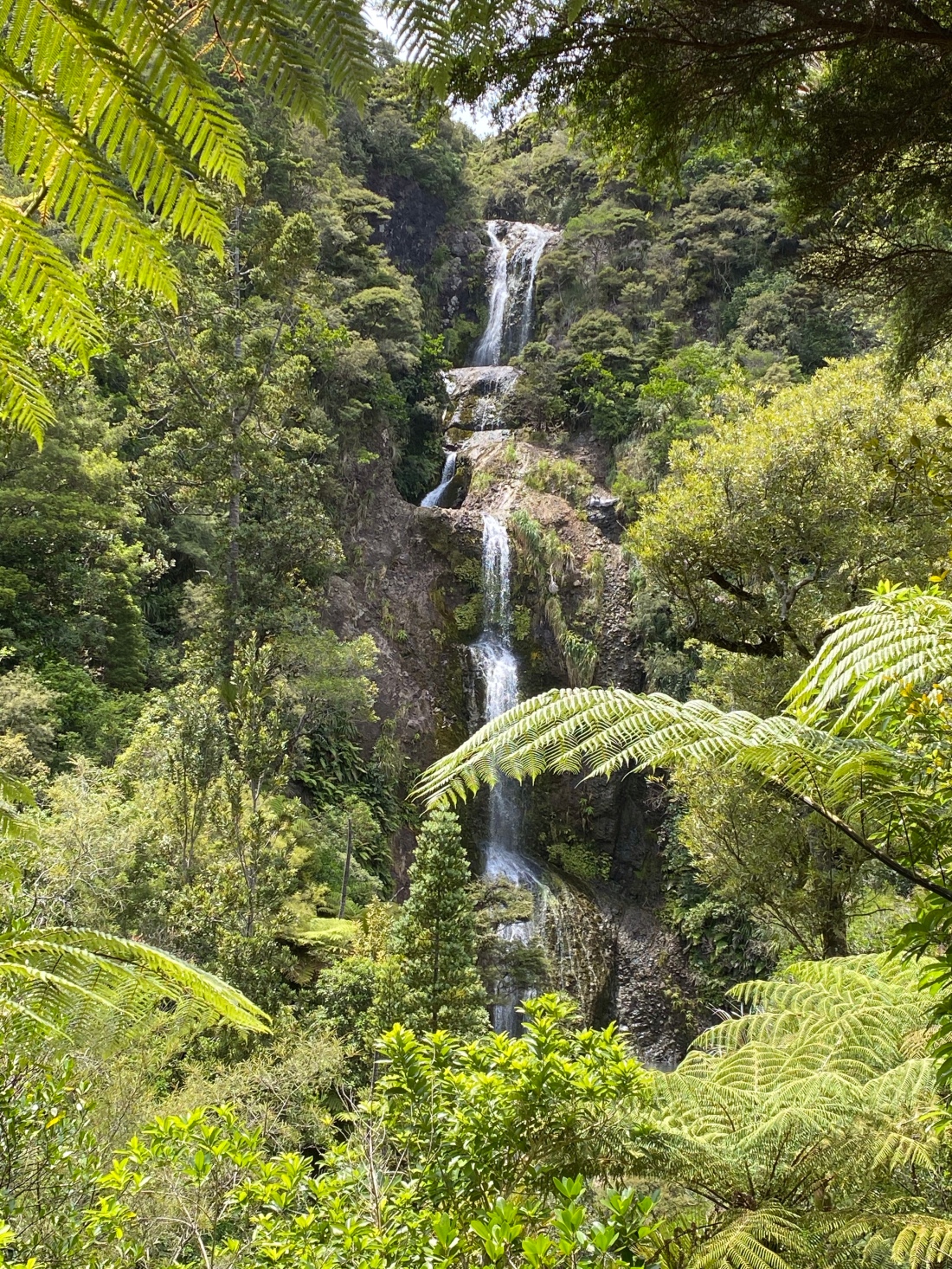 We then began a descent to the foot of the falls, which was quite busy with other people. Some were swimming in the pool at the bottom of the falls. Others were exploring the rocks around about. I dipped a toe into the pool. It was quite cold! I was definitely not one of the hardy souls who were happy to dive straight in – or indeed, dive in at all!

You can walk from here another track to the top of the falls, but we felt we had already seen the best of Kitekite (original Maori name being Ketekete), so we retraced our steps back to the start. Along the way we were rewarded by seeing a fantail, flitting around the bush. It had its tail properly fanned out and was a delight to behold! I was told that fantails have a life span of only three years and that probably because of this, for Maori’s, they are a sign of death.

After a brief lunch break, we went to South Piha beach, which in common with Raglan is a world famous surfing beach. There seemed to be a surf school going on at the southern most end of the beach, as a constant stream of wet-suited, board-carrying people of all ages made their way into the sea. Also like Raglan, it has black, volcanic sand which today was scorching underfoot! We took the foot friendly route along the estuary to the main beach, where the wet sand was easier (and much cooler!) to navigate.

Standing in the middle of South Piha, the iconic Lion Rock, which juts proudly into the sea, was to our right. It really was an impressive sight.

This was the busiest I had yet seen a NZ beach, but there was still plenty of space and you didn’t feel like you were right on top of your neighbours. Lifeguards were on duty and swimming was only permitted between the flags. It didn’t take long to work out why. There were many different currents operating in the bay – some pulling left to right, some pushing in from the sea and others dragging you out and, if you weren’t careful, sucking you under.

We spent quite a while out in the surf, bodyboarding back to the shore. It was such fun! But I was also aware of how far ‘off course’ the tide would take me and was very grateful for the watchful presence of the lifeguards.

What a truly awesome place! 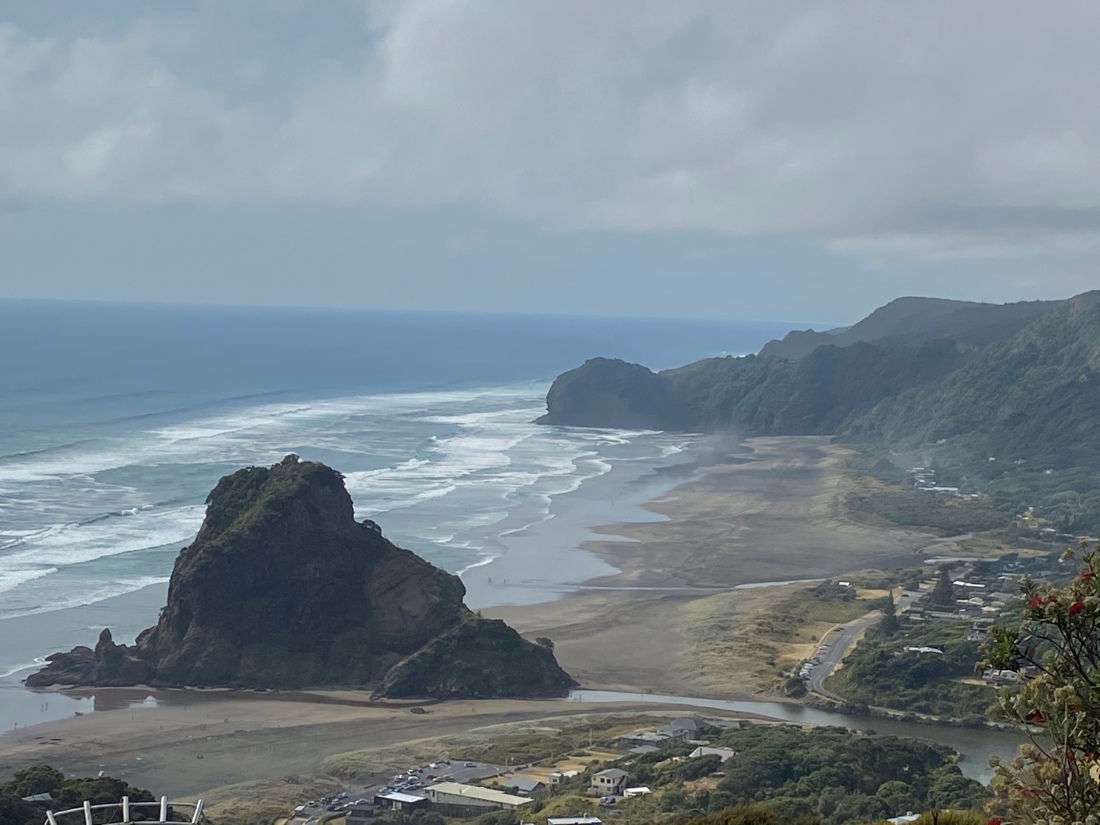 One thing I have learned about the black sand of Piha is that it likes to stick around long after the visit has been made. This sand does NOT want to leave your clothes, or your skin! But it was such a beautiful, fun, worthwhile visit and I would highly recommend it!

Today I visited Maraetai Beach – a place I used to go to a lot back in the day. It has changed very little in the 20 years since I have been there, although the parking is a little more organised these days and, of course, there are way more houses than ever there was. It seems that NZ has expanded quite rapidly during the past ten years or so. I suppose the same could be said for many places, but it seems particularly obvious in a land where there used to be so much, well, land!

It was a sparkling day, with a bright blue sky, punctuated by fluffy white clouds.

The water shimmered in various shades of turquoise, while across the water, Waiheke Island framed the view with lush greens.

After lunch at the Maraetai Wharf Store, we went for a stroll along the beach. 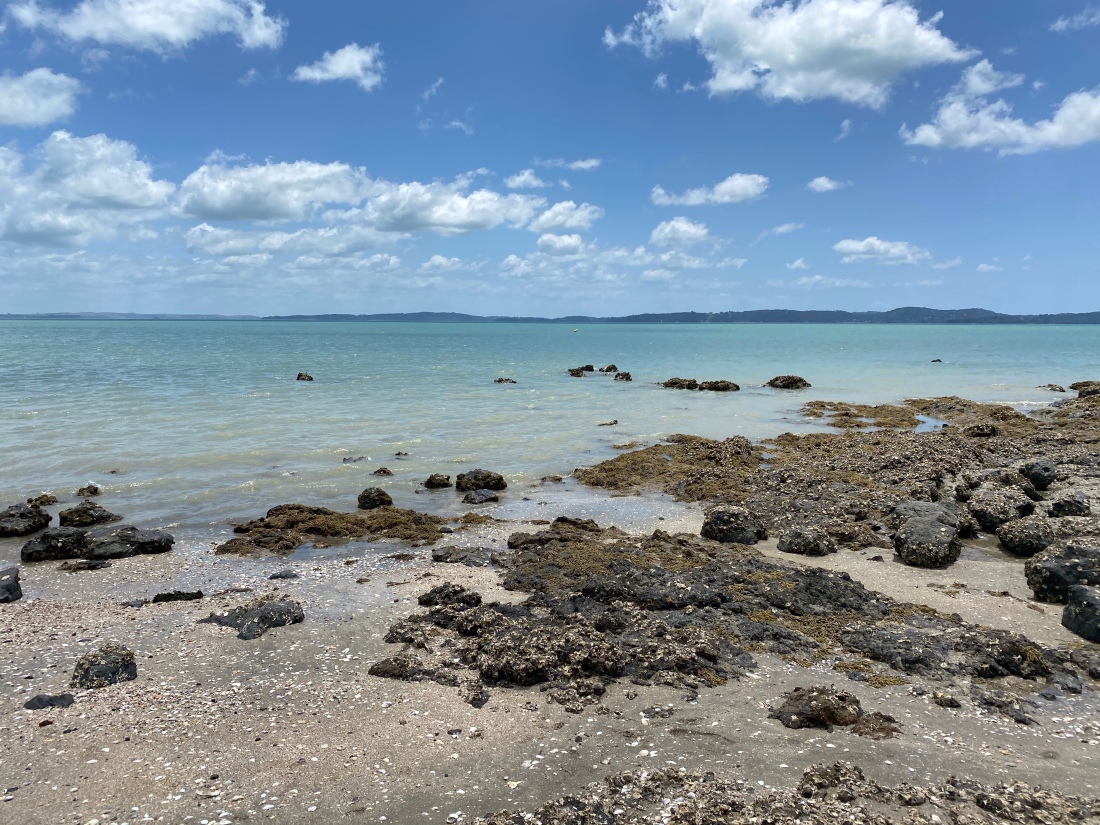 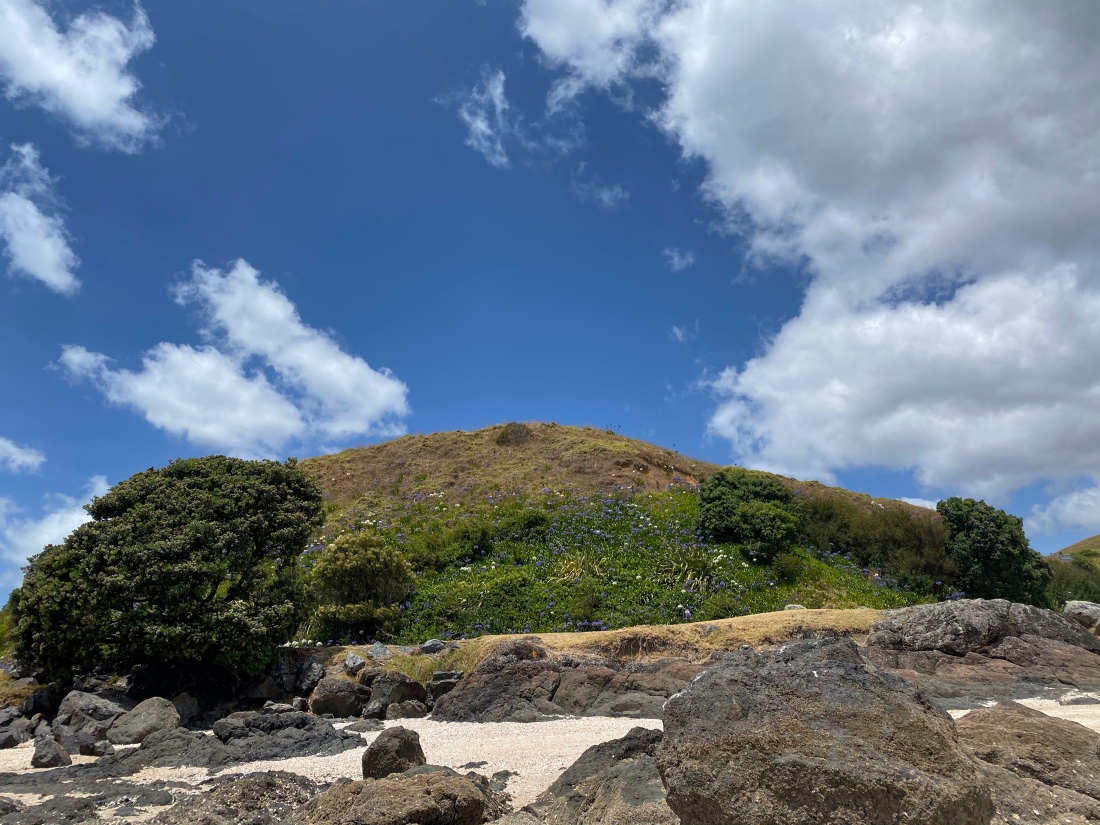 We saw two wakas, which belonged to the Maketu Marae, which oddly enough is a little bit further south of Raglan, where I was the other day! 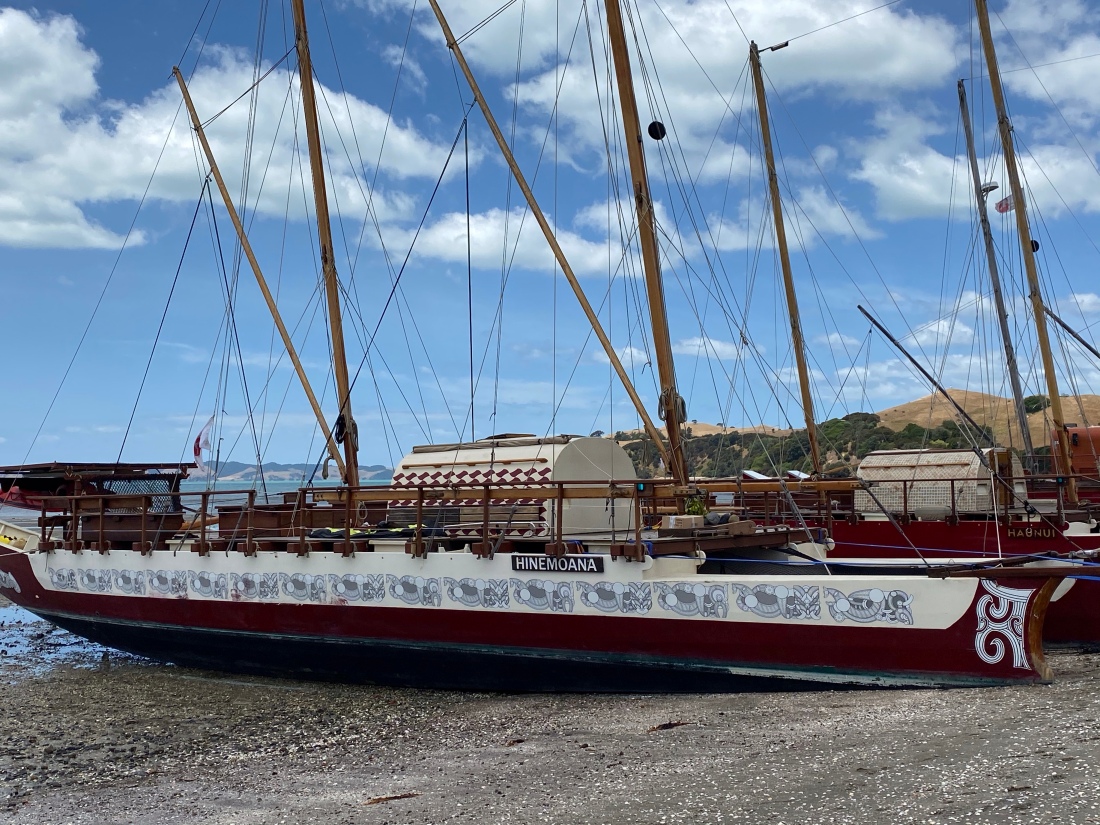 They were directly across the road from the Umupuia Marae, so I assume they were visiting for a while. 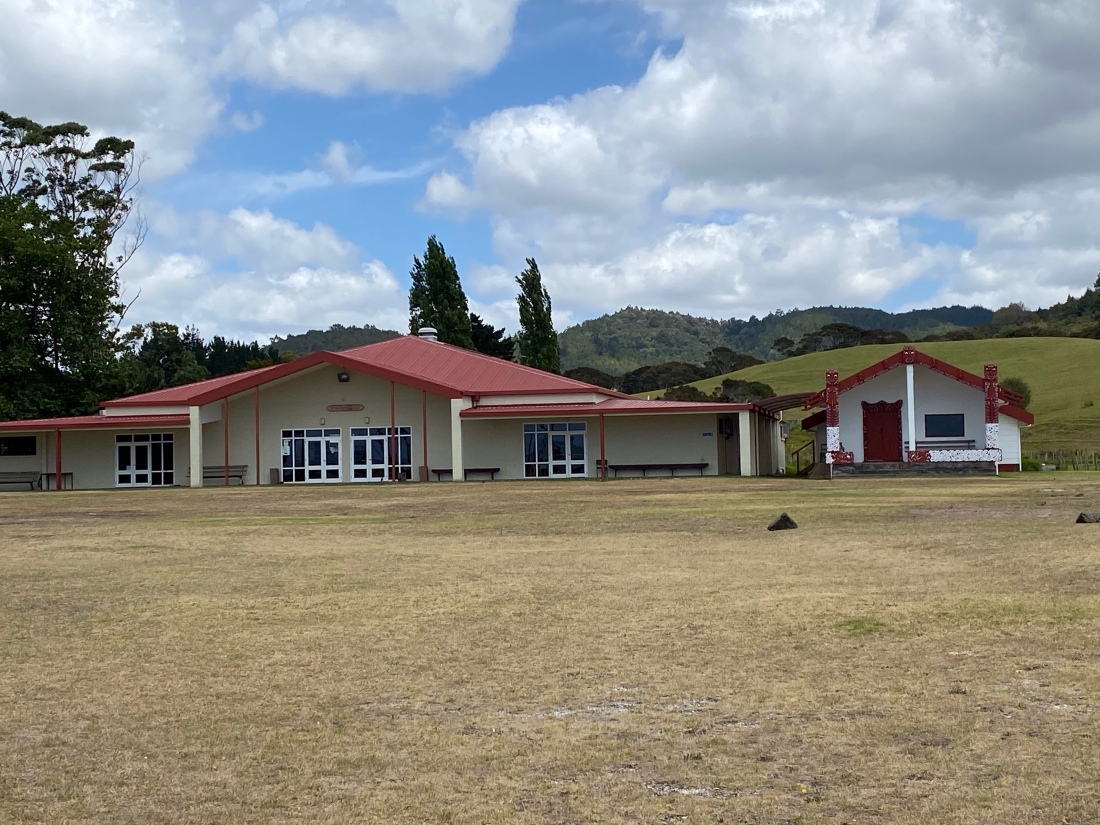 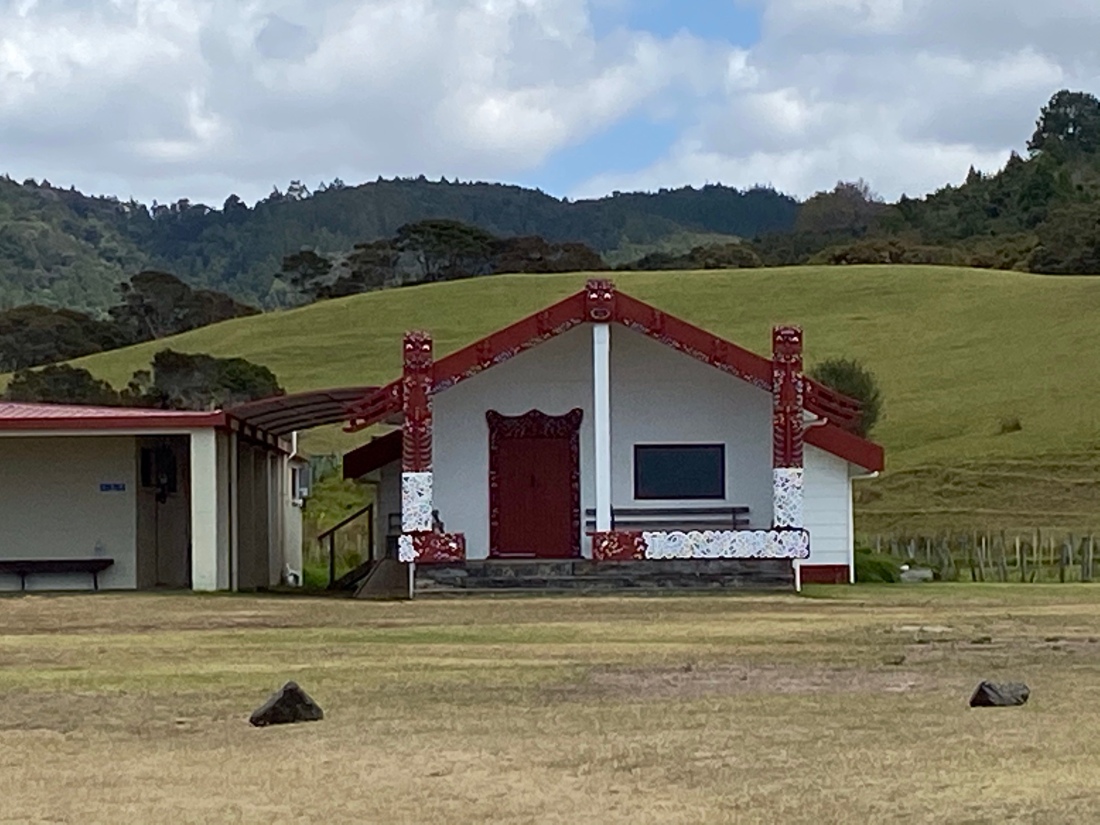 It was another lovely trip down memory lane/beach. What a privilege it is to be here.

This morning, we set a course west and headed for the coastal town of Raglan. The journey from Cambridge took around an hour, and as we approached Raglan, the road became much more twisty and winding. The scenery was stunning, and more than enough to keep anyone happily occupied.

Raglan used to be quite a small town, but as with so many other places in NZ, its population seems to have exploded in recent years. Although it’s a little too far away from a big town for my liking, it’s not hard to see why so many people are flocking to live there. It is beautiful! 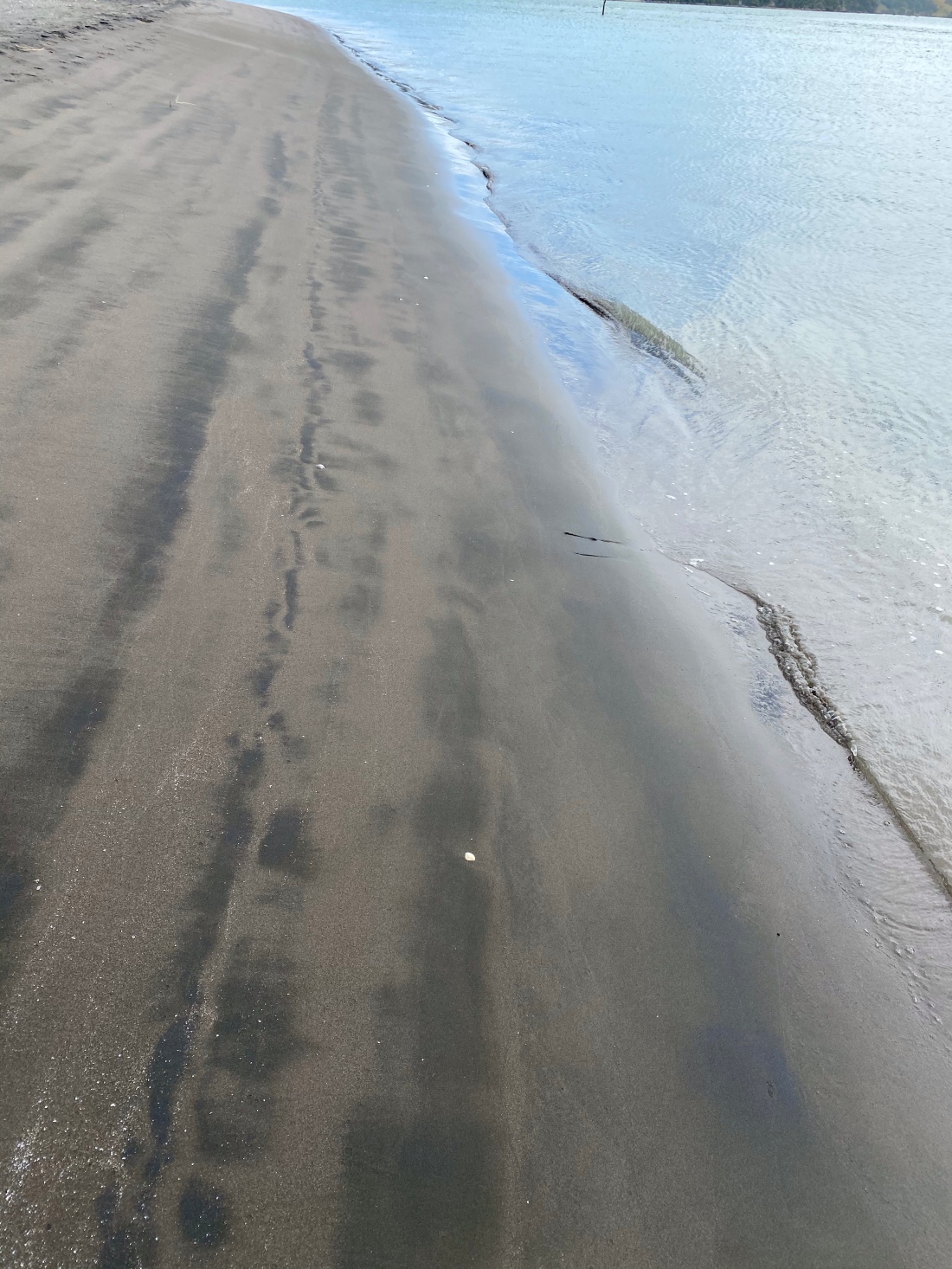 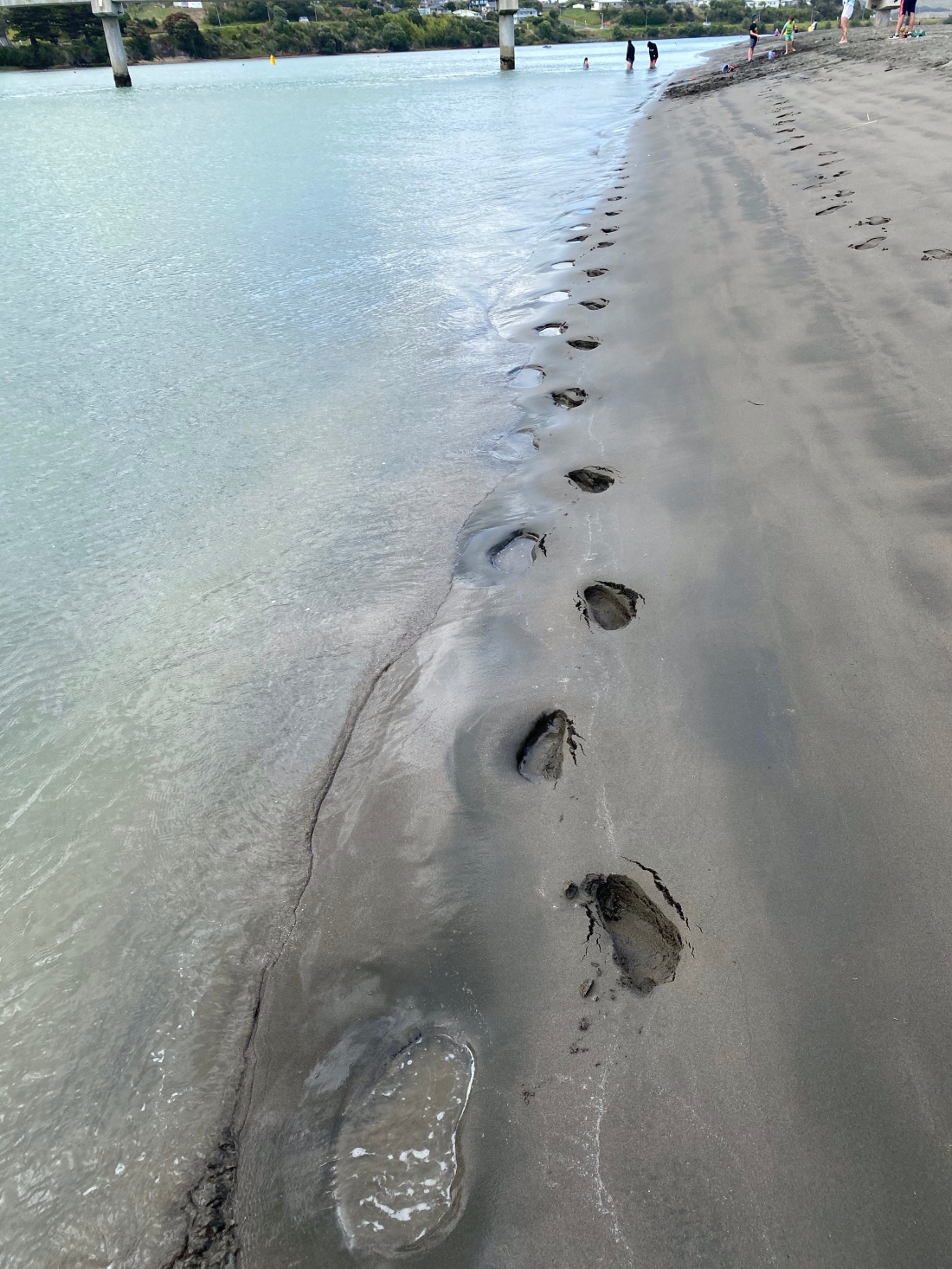 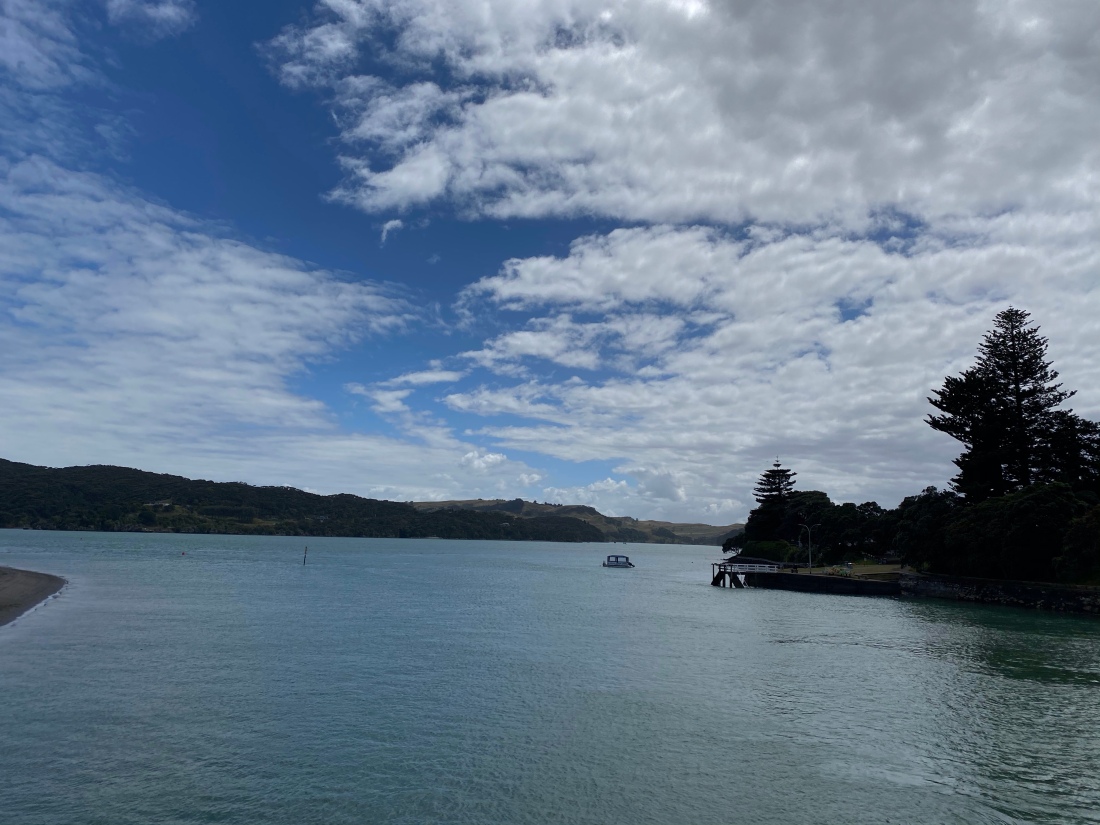 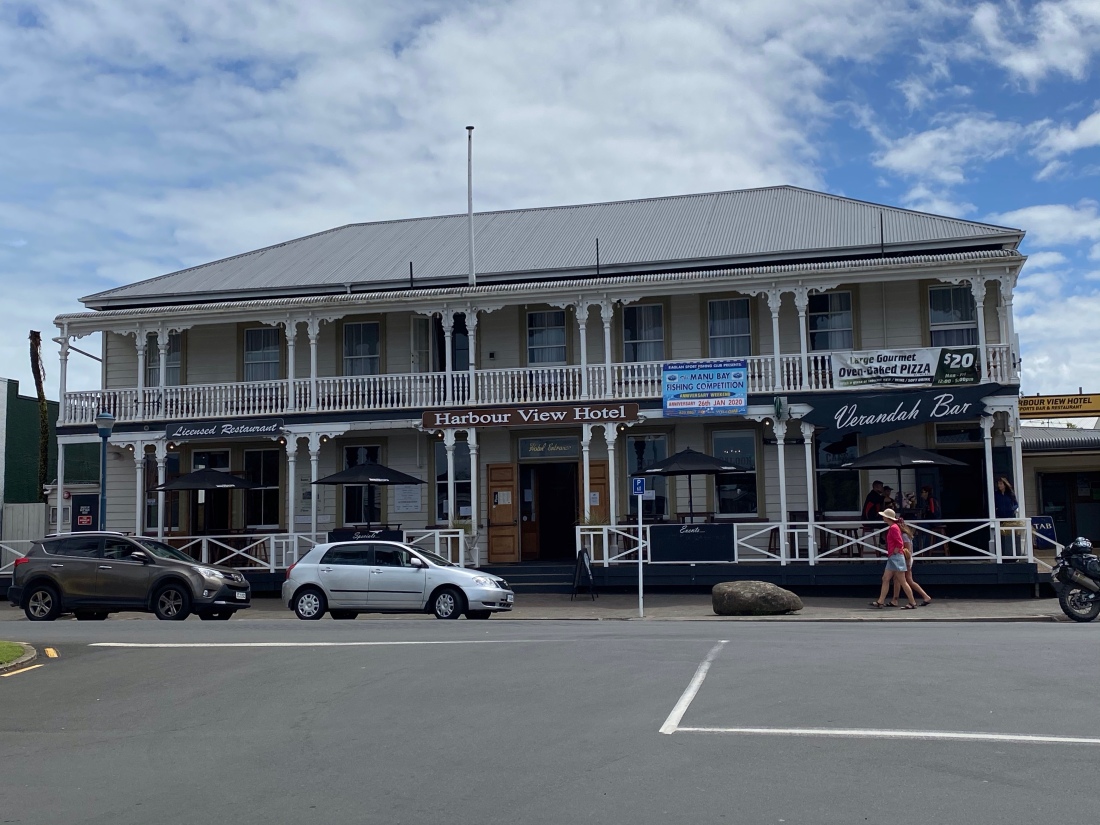 The black sand is due to the volcanic region in which Raglan is situated. Mt Karioi in the Pirongia Forest Park, is close by, and is (I am happy to report!) an extinct volcano. In very hot weather, black sand is very hard (by which I mean hot!) to walk on, but today it was merely beautifully warm and I was pleased to take a walk along the water’s edge and even paddle in the sea!

I was particularly pleased to see several stunning examples of the beautiful pohutukawa tree, the red blossom of which, combined with its flowering period that coincides with December, is known as the New Zealand Christmas tree.

We stopped for lunch at ‘Raglan Fish’ and had the most delicious fish, chips and squid rings meal. I mean, in this location, what else would we have eaten?! I had gurnard for the first time. It is caught locally and could not have been fresher! 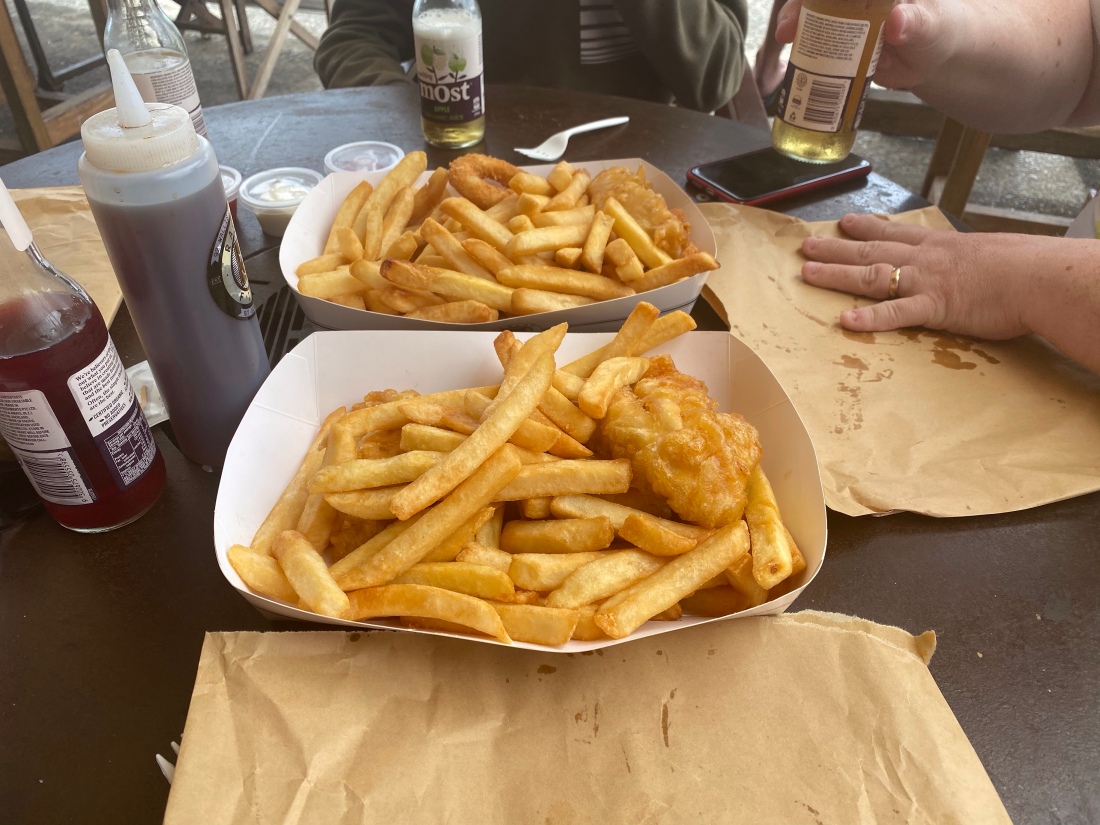 Raglan is on the west coast and there is pretty much nothing but sea for thousands of miles, between here and Australia, which is quite a freaky thought! This is also a very popular spot for surfing. 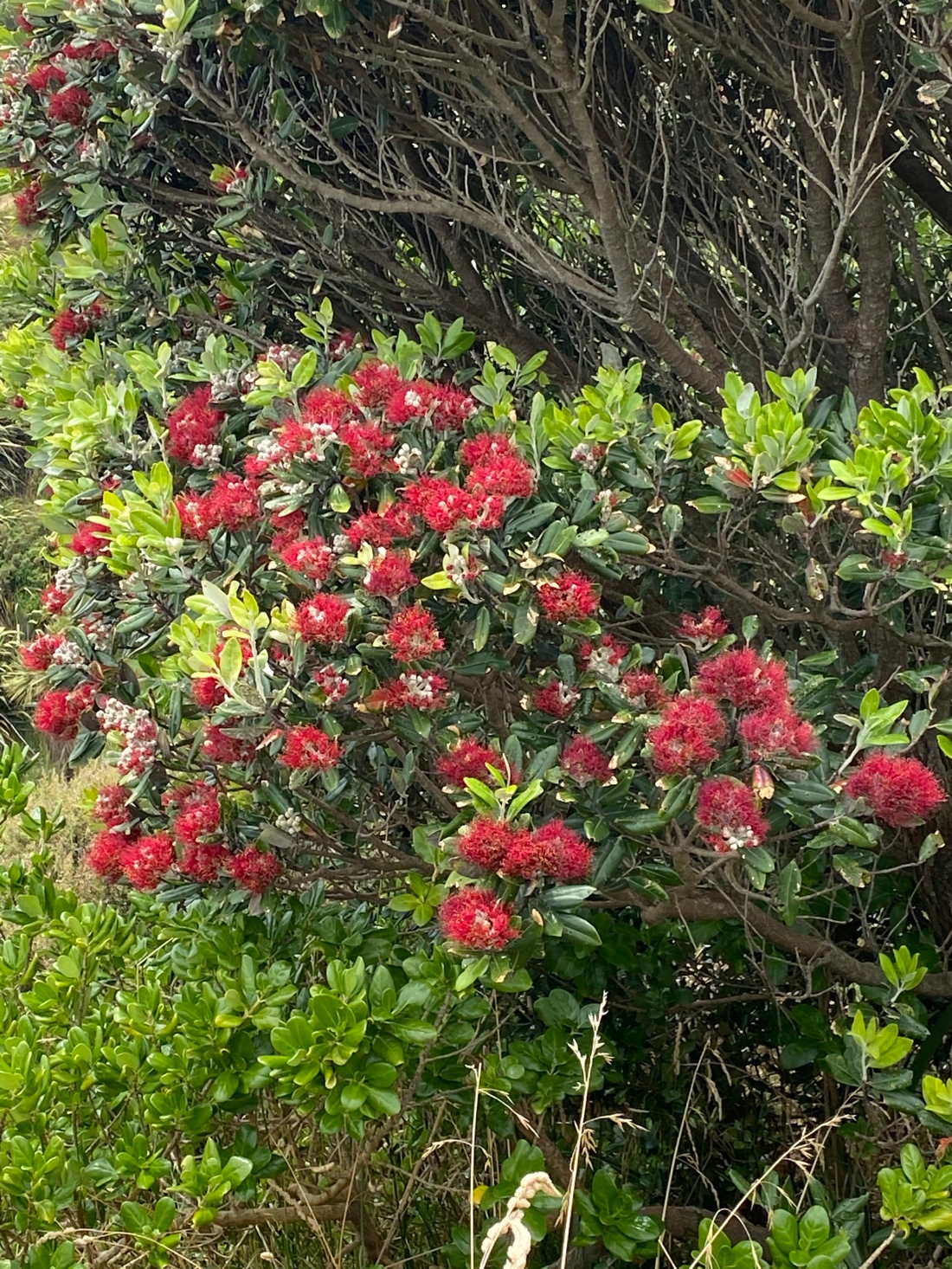 Overlooking the beach, there was an interesting compass, with statues standing at north, south, east and west – representing water, fire, earth and air at particular compass points. 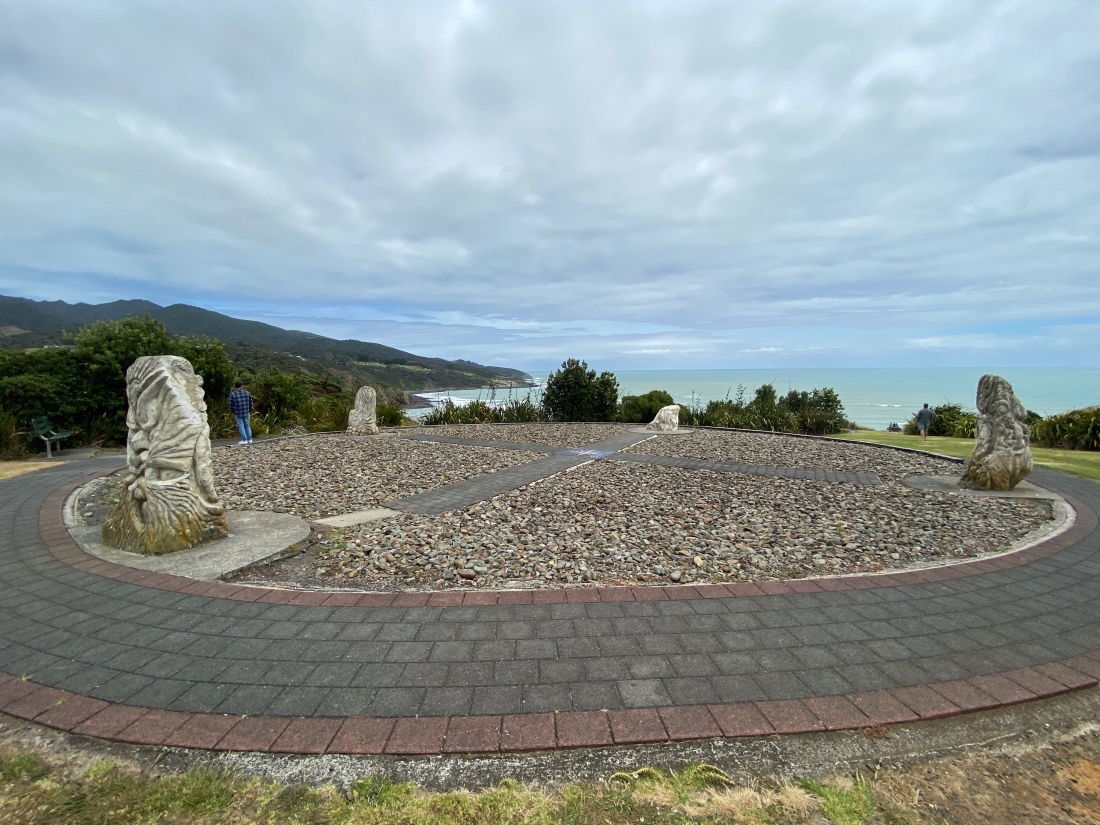 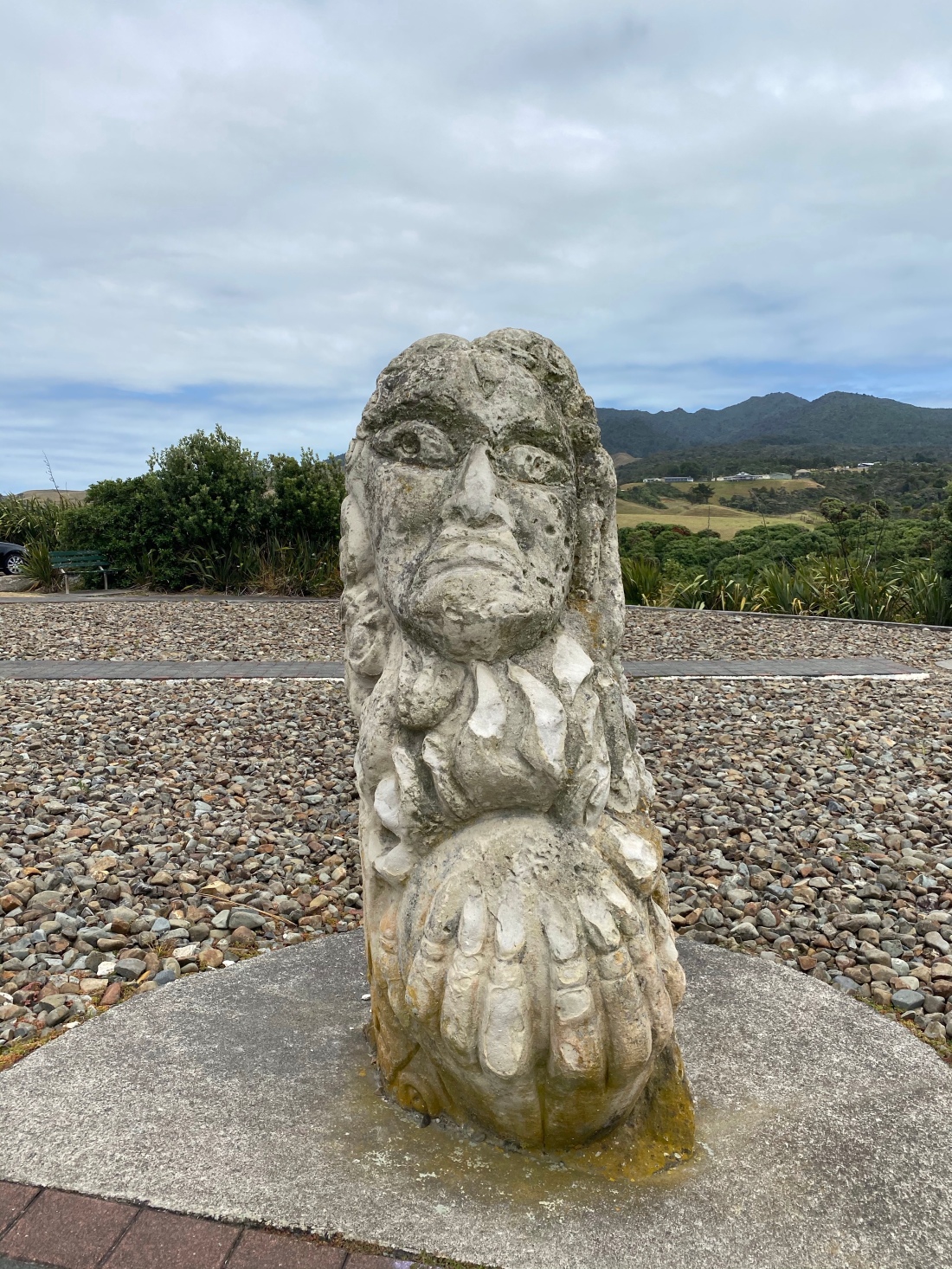 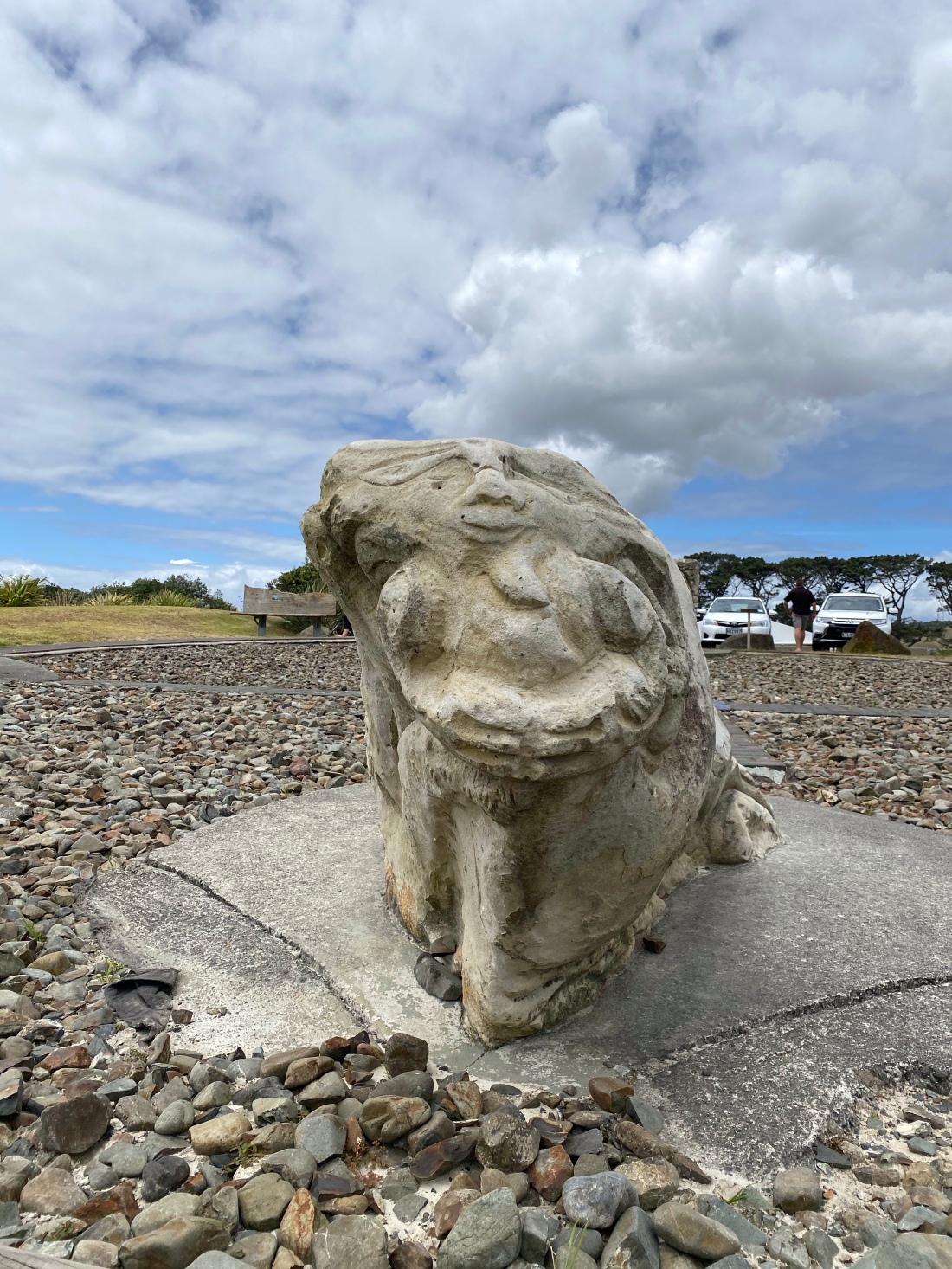 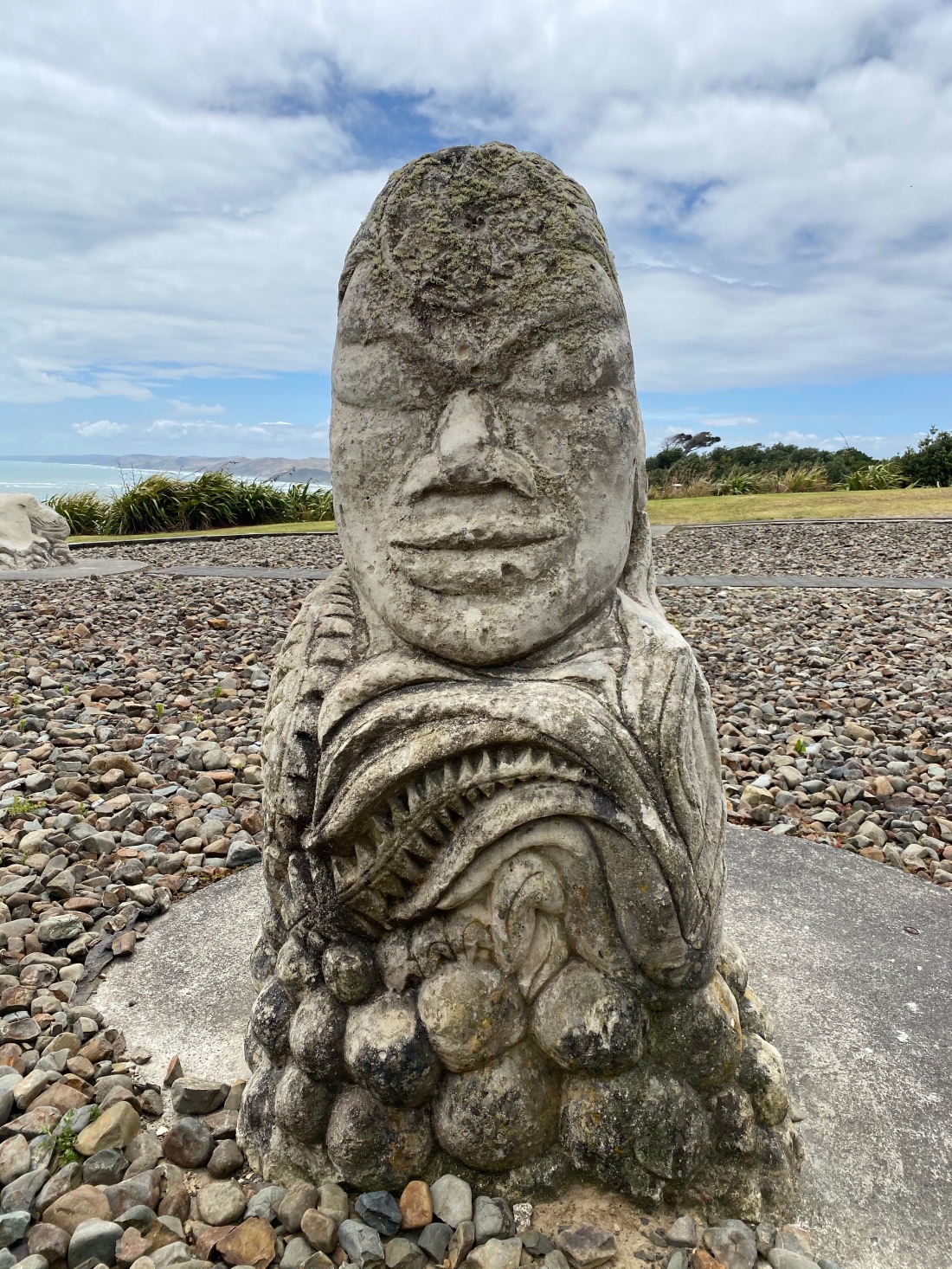 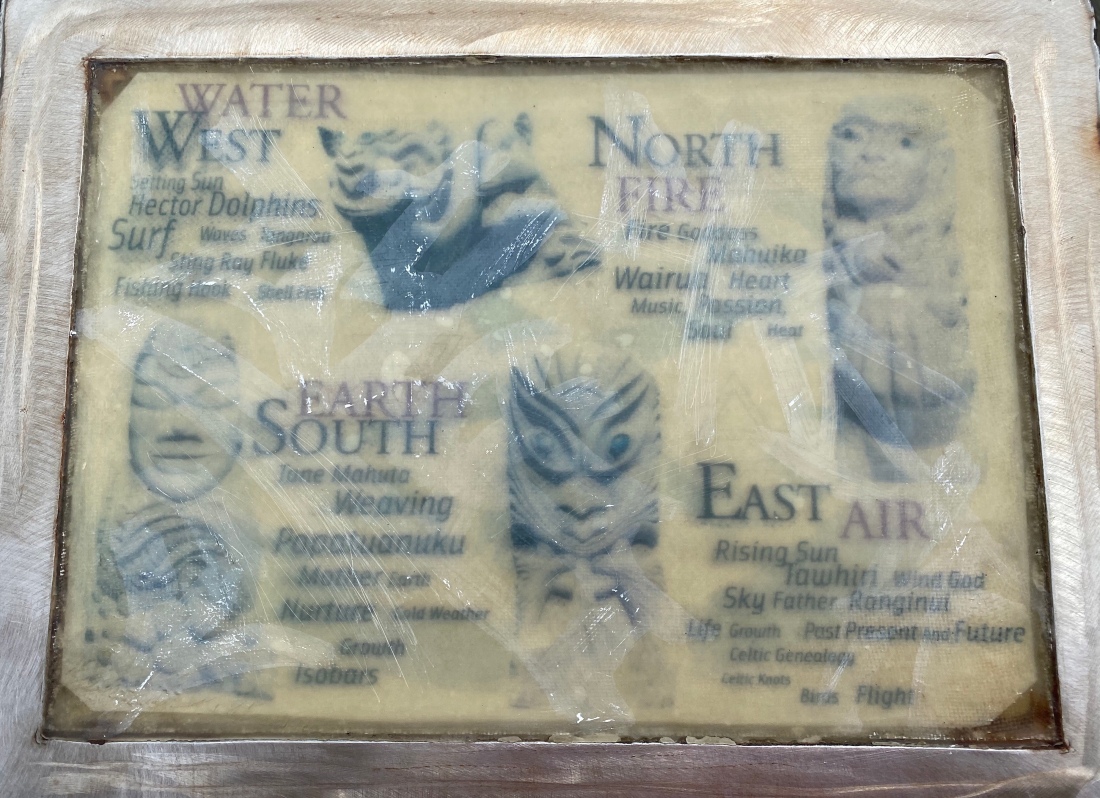 From Raglan, we went to the Waireinga/ Bridal Veil Falls. A short walk through the bush took us to a look out point from which we could see the falls in all its glory!

Such a spectacular sight!